Here's what a few of our customers have had to say about us.
Have a testimonial of your own to share? Click Here fill out our short testimonial form.

I have been hunting wild ringnecks in Kansas since 1996. I mainly hunted over near Dodge City. I have shot hundreds of Kansas cockbirds in my lifetime and quail. However, things have changed alot since 1996. More hunting pressure, landowners die and sell their land, some lease it out, some gets developed. So all the "private ground" I used to have access to I don't anymore. The thing is I was the so-called "guide" for our group of 8 - 12 guys give or take. I had friends from Colorado and family from Texas who would all join up once a year in November to hunt Kansas cockbirds, hang out together, eat and drink and just have a good time. However the tipping point was a couple of years ago we hunted in and around the same grounds I had been hunting since 1996. It was tough sledding for sure. We literally almost got skunked because we hunted strictly WIA only because all the private grounds were off-limits for whatever reasons. Well, that was enough for alot of guys to say they wouldn't come back if it meant having to go through all that again. I don't blame them, hell if it was just me and my dogs and one guy then sure, that's par for the course, however when you have a group or groups of guys, getting into birds and shooting is a big part of it. So I looked around and saw Jason's outfit on Facebook and the internet. I talked to him and bit, did some research and then we pulled the trigger and hunted late November 2017. Well folks, it was well worth the $$$ and the time. We are back again this November/December 2018 and will be the next year and the next. We are making it a tradition so to speak with our group. So if you are on the fence, not sure if you want to pay the $$$ to hunt wild roosters in Kansas or thing maybe they are a kick and shoot place with pen raised birds, think again, these birds are as wild as they come. I should know....Jason and his gang just know how to cultivate and managed their land and birds....

Found Upland Inn Hunts while watching Outdoor Channel TV. I wrote Jason a short note and had a immediate response from him. He explained his hunting operation to me so I decided to try him. I have been hunting pheasants for 55 years, I have hunted in South Dakota, North Dakota, Nebraska, Utah, and a few other places along the way. Upland Inn is without doubt the best place not only to hunt good wild birds, but you are greeted and made to feel like part of the family. Good lodging, great food, and great hunting. I have already planned my hunt for the 2017 Pheasant Season, and I know I won't be disappointed. I have been looking for a place like this to hunt for a long time, now I have found it, I will keep returning. 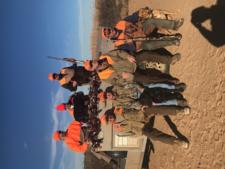 WELL WHERE DO I START. I'VE BEEN PHEASANT HUNTING SINCE I WAS A KID GROWING UP JUST SOUTHWEST OF TOPEKA, KANSAS (AUBURN) THIS WAS PROBABLY THE BEST HUNT I HAD EVER BEEN ON. 7 OF US HUNTED TWO DAYS WITH LODGING AT UPLAND INN. THE GUIDES ARE VERY PROFESSIONAL AND LOOK TO MAKE YOUR HUNT THE BEST IT CAN BE. I HIGHLY RECOMMEND UPLAND INN HUNTS YOU WILL HAVE THE HUNT OF A LIFETIME. OH YES WE DID LIMIT OUT BOTH DAYS. THIS WAS A REPEAT HUNT FROM THE YEAR BEFORE IN WHICH WE LIMITED OUT THE TWO DAYS LAST YEAR ALSO. JIM TOWERY

To our past clients: We appreciate your comments and if you would, fill out the form with comments and a photo about your experience at Upland Inn Hunts. Fields marked with * are required. Please enter the Name field how you want your name to read on our website (Examples: John Doe, J. Doe, John D., John Doe Corporation).